Last week I had the privilege of landing in an area that possibly never had an airplane before.  We heard about a local pastor’s wife that was having labor difficulties.  The area where they live has a section of the river that is challenging enough that checkout with an instructor pilot is required.  However, using Google earth, we were able to find a section of river that would give enough margin and similar in length to another post that I had recently been checked out in.   Poepe (-7.662095, 139.662926) is where they were from.  Yawimu where we picked them up (-7.824544, 139.668902) to (-7.821953, 139.661793) landing area (-7.824322, 139.675490) the dock.  The coordinates in the parentheses if copied and pasted into Google maps or Google earth should bring you to the locations.  The larger pictures below were taken with my phone at the dock where we met the mother and father.  Yes, the baby was delivered while they were en-route to Yawimu on the river in a boat or what some people would more likely consider a canoe (likely something similar in the smaller picture or in the webpage header).

Even though the baby had already been born they still requested to be taken to the city for a checkup and since we were there it made sense to do so.  There was no cell service once they left Poepe to cancel the plane after the delivery.  For my sake I’m glad the baby was delivered safely on the boat/canoe rather than in the back of the airplane.  Not sure I’m ready for that yet.  For the mothers though reading this, maybe the back of an airplane would be nicer than a small boat on a river?  Next week I will be taking them back home or at least far as Yawimu, from there they will take the 3 hour boat/canoe ride back to their home. 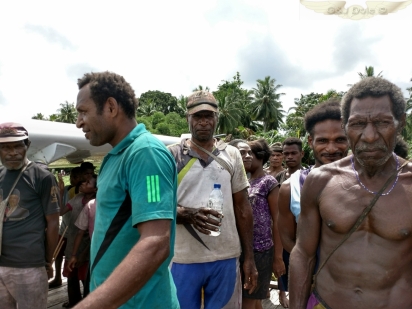 During a routine flight to Kepi I recently pickup a young man and his mother from Kepi.  I’m not sure what he was suffering from, it may have been Dengue Fever which had is bad enough in normal circumstances.  If I understood correctly he had been suffering from it for a month by this time, which I don’t think is normal 1-2 weeks typically I believe.  Dengue it’s not fun, just ask my kids (I found out this week that the boy was diagnosed with leukemia, not dengue as was mentioned while picking him up).  Anyway I started out at a mid range altitude 7500′.  However about mid way back (1hr flight) a lot of noise and commotion erupted from the back.  The weather wasn’t the greatest that day either so I needed to keep focused on the flying.  Our non-flying crew member Bobby (so thankful for having him on board) was able to communicate with me that a lower altitude would be better so down we go 5500′ or 3500′ I don’t remember which but anyway things started to settle down a bit after leveling off briefly at the lower altitude, before continuing down for arrival.  It was also a bit of work for Bobby to get everyone involved back in their seats with seat-belts on for landing, again very thankful for having him on board to help in situations like this.  Later I learned that the commotion had started when the boy had stopped breathing.  Thankful for God’s grace allowing us  to arrive back in Merauke with everyone on board still breathing.

Lots of other routine flights being carried out, serving the south coast communities here in Papua.  And a few special flights that were routine in nature but special because of the individuals we were serving.  However to keep this blog from getting too long winded I’ll save those stories of the special guests and their flights for another time.