Well it seems that big events/or things we have waited for happen in twos here in Papua.  First it was our stuff arriving and our visa’s being ready on the same day back in Sept.  And today it was our paperwork and licence plates showing up for our motorcycles and news that my pilot licence is ready for pick up in Jakarta.

This weekend I will travel to Jakarta to pickup my pilot licence. Once I have the licence in hand I will have the green light to start flying next week as well which is exciting.  The wait is almost over!!!  And hopefully I can start getting some flying footage to add to our video library.

Quick family update on how the family has been doing.  Julie had her first go around with Dengue about a month ago.  Thankfully she has pretty much recovered from that and has just gotten over a common cold this week.  Franklin and Isaac also missed a couple days this week from the same cold but are doing better now.  So far Jaclynn and I remain pretty healthy Lord willing we can avoid falling prey as well.

Quick MAF update a couple weeks ago while on a ride along we landed in Anggruk and we were met by the tribe dancing and singing.  The part I didn’t know at first was our passengers were coming to deliver to them solar powered audio Bibles in their heart language.  I think the group was from Hearing is Believing if I’m mistaken. It was really neat to be apart of the flight that brought in the audio Bibles and to see some of the peoples traditional dances.  Also, our family got to be present at PK-MAF’s dedication, a brand new Kodiak that recently arrived from the States. And it was pretty cool when the plane first arrived and meeting the ferry pilot.  Turned out that I had done a couple flight lessons with his daughter back in my flight instructing days. Sometimes the world can be pretty small!!  We are still waiting to hear about which base we will be sent to but hopefully after I have been flying for a few months they will give us that information. 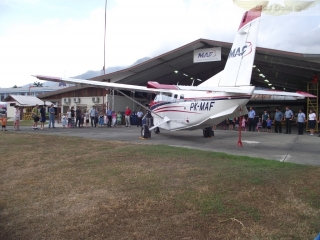