Today I had the privilege of riding along with Tim into the interior of Papua.  Flight days tend to start early around here for a couple reasons the main one being weather.  Here in the tropics weather tends to build throughout the day making the earlier flights safer and easier.  If it means getting into an airplane a 4:25 am alarm clock is not so bad.  Arriving at the airport around 5:00 am for final flight preparations and pre-flighting the airplane and depart at 6:00 am.  Our first flight took us to Ilu were we dropped off a Caravan load of chairs for a local Church there.  On the return trip there was a bit of confusion as at first we heard there was a lady having difficulty in child labour but never showed up so we took two other gentlemen instead that were there at the airplane wanting a ride back to Sentani.  There was also talk of us picking up some others at Mulia as well which as another community about 7 miles away from Ilu.  That however changes as we are were overhead preparing to land they contacted us to tell us that they didn’t have anyone for us to pickup so we turned for home to drop off our two passengers and pickup our next load. 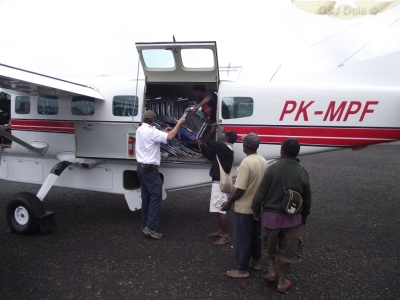 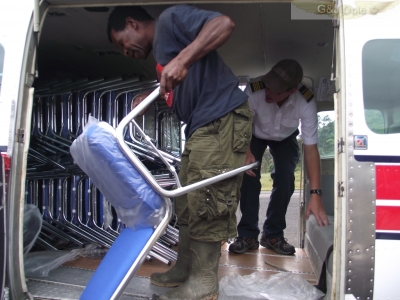 Our second flight we carried a full load of mixed supplies and one passenger to Bime.  The first 3 pictures were taken while on the approach into Bime.  The first 2 are of what looks like a new runway under construction near to where we were headed.  The approach for Bime is one of the more challenging ones in Papua mainly because if one needs to abort the landing it requires a quick right turn and then a left turn of more than 180 turn safely back out.  All that to say it will be a while before they send me here which is okay by me. 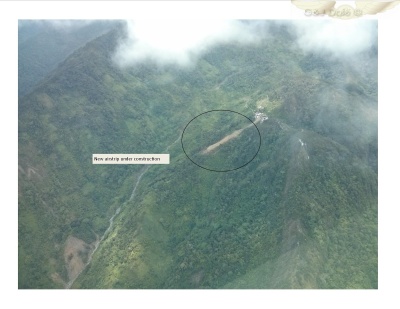 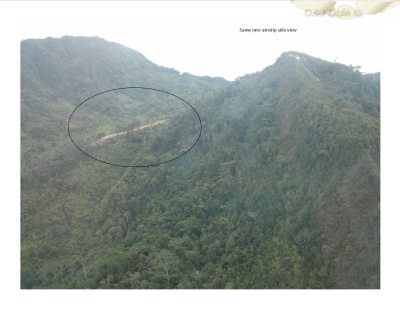 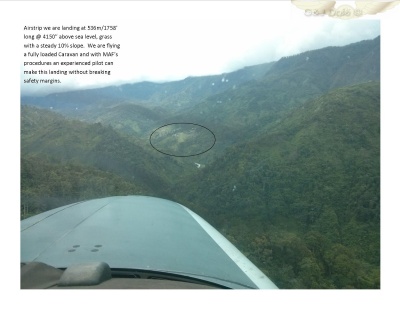 Lying next to the plane was the cargo that we were taking back to Sentani along with 11 passengers, and yes that is a pig, hog tied (no pun intended) by Tim’s feet.  This stop was a little stressful to say the least as we had weather moving in, one to many passengers, some confusions regarding tickets and total money required.  Thankfully Tim was dealing with that and I was basically just along for the ride.  That being said Tim did asked me to help make sure that everyone was seated and had their belts on correctly which also meant the children and infants needed to have a kiddy belt on.  I was doing okay helping the one mother in the back with her toddler next however was a mother nursing her baby that needed help.  Yes, a little awkward for this prairie boy, thankfully there was a local young man helping someone else up front that came back to rescue me, by taking over the explanation and helped the mother put the kiddy belt on her child. 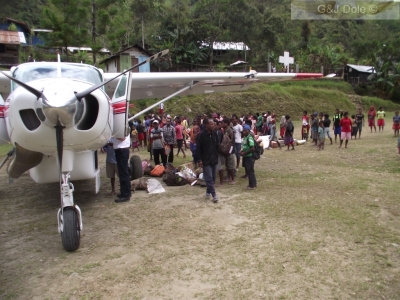 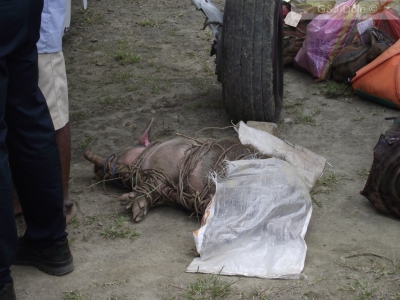 PS: Pigs do not like the start up procedure, as soon as Tim hit the starter the pig started to wiggle and squeal, but once the engine was running couldn’t hear it anymore but also didn’t feel him move around much after that as well until we landed in Sentani.