December has been a very busy month as we find ourselves taking trips on the weekends with friends and neighbors outside of the city with our two bikes. Everyone has been fighting off different kinds of fevers which have been going around like crazy throughout the schools. Greg and I have been working at strengthening our language skills. And then we have been planing for our first Christmas in Indonesia along with moving to a new house here in Salatiga a few days after Christmas.

Besides the fevers that have been going around it has been a great time of really getting around the city on my trusty scooter. I have been able to really help Greg out with picking up the two younger children from school on the days that he works with his tutor. Then it is great to be able to whip down to the local story instead of taking the 40 min. round trip walk that it would have taken. But the funnest time came last weekend when I actually got to get out of the city and drove to some new places. Our neighbors invited to take us to a huge Catholic place that has these really cool pathways and statues to look out. Which meant that we would need to drive both of our bikes so that our whole family would be able to attend.  On Saturday Greg went out with me to practice on different main roads and then somehow we ended up on back roads between villages.  Now here they are considered roads however I would call them trails or at times you could say that I was off the beaten path a little.  It was a total blast and I think that my brother would have been proud of his older sister and her biking abilities!!! Then the next day we traveled with our friends and I had two children on the bike with me.  We traveled no more then maybe ten minutes and it started to rain a good jungle kind of rain. I am happy to say that I did drive all the way there in the rain like any true Indonesia would have laughing all the way.  I think that I was even singing Christmas songs though I did try to change some of the words to the songs as the word snow was not working for me since I was so wet from the rain!! The children thought this was great as most times back home we try to stay out of the rain not in it and not especially in the middle of December.  We had a great time walking around in the rain and re-walking the pathways after the rain had stopped. The kids where quite the hit as they were the only white people there and even got to poise with a group of college age kids who wanted to take a picture with white kids.
Then came the drive home which I am happy to report was without rain as we drove through rice fields and saw water buffaloes, ducks and other villages.  However it was a different way home that actually ended up finding this rookie driver on the main highway with lots of big trucks, buses, and more motorbikes then she cares to admit. I was so happy to arrive home safe and sound that night. It was a great time of fellowship, connecting with the Indonesia people, and mastering driving like a Indonesia.
Below are some pictures from the place that we went to visit and some of the life size statues that they have for you to look at.  See if you can notice which Bible story they are from.  And lastly are family wanted to wish you all a very Merry Christmas and a bright New Year!!! 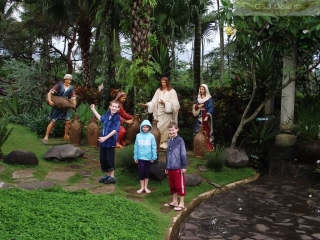 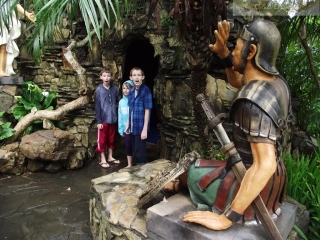 4 thoughts on “Out and About”