A couple weeks back the kids were able to participate in a pine car derby.  Isaac and Jaclynn were competing against some pretty tough competitors as they both had pretty fast cars.  Jaclynn won most of her heats but still failed to place.   They had fun despite the tough competition.  Franklin on the other hand had fewer competitors which allowed him to place 3rd which was exciting for him.  At the end of the evening they also had an option for the track to have a loop to loop installed which the kids had the option to risk their cars on.  Their cars didn’t make it through the loop but they did survive the crash.

Our lean mean driving machines showing off after their last basket ball game for the season.  They both had a great time playing basketball.  They both were able to learn about sportsmanship, gained new skills, how to be apart of a team while having fun.  We are so thankful that it worked out for them to participate like this.
On average I think the boys score 1-2 baskets each game and a couple times more.  It was also very encouraging as a parent to watch them improve over the course of the season.  Not only our boys but each of their teammates as well.  Their coaches did an excellent job!

Then there is me, sporting my sad 2 week old beard.  I was thinking that MAF’s standardization is kind of the last big preparation time, so as a fun thing on the side to mark the occasion, I decided to adopt the hockey playoff traditional beard until it’s all over.  Now being that a pilot needs to maintain some sort of professional look,  I have taken the liberty to modified it slightly with an occasional trimming as needed.
On the more serious side of things, the course is actually going pretty good even thou it may not look like it from the pictures.  I have just finished up a couple written exams over the weekend.  Which are nice to have out of the way.  This week and next we will be working on different projects in the hanger as we get familiar with the PT6 (Turbine engine for the Caravan and Kodiak) as well as the Caravan and Kodiak themselves.
The 27th is when I get to start the flying part which I’m also looking forward to.  Some may wonder why all the training, well let me say it has been well worth the time and effort.  There is lots I have forgotten over the past few years and lots of new info as well.  When I stop learning I should also stop flying. 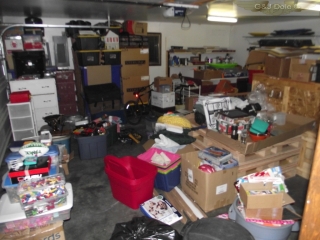 And Julie’s hard-work   and no not everything in the picture is ours.  The house we are renting is owned by missionaries that are overseas and some of the stuff is theirs that they have stored in the garage.  Anyway Julie has been faithfully working at home.  Her and the kids are plugging away at homeschooling still.  Mixed in with that Julie has also begun the sorting process of what goes in the crates, storage and give away pile.  So while I have been having fun at the airport, I’m so thankful for my wonderful wife that has been working diligently behind the scenes at home.