Well like the title of this post states we are winding down the second week of our stay here in MI. So far it has been a great trip. We have had the opportunity to share at 2 Churches the last two Sundays. And that was all that we planned before leaving MB. However while we have been in MI we have been asked to speak at a couple more churches one of which is the church Julie grew up in. Which is very exciting. I have also been very encouraged by individuals from these past two churches, that appreciated my message that I spoke. Not that I can take credit as it is the Lords work, but it has lifted my spirits knowing that I was used to touch some lives through the words God choose to speak through me. I’m still feeling however, that preaching is not my calling at least on a permanent full time basis at this time. I won’t say never though, saying never can sometimes be a sure way of it coming to pass.
I should mention some of our other highlights for the trip so far. We had the chance to visit the School (SMAT) here in Ionia MI on Tuesday. Looks like it will be a good year working with some good instructors in a pretty nice facility. The course I will be involved in is a 12 month course that once completed will give me an Airframe & Power plant licence (A&P). Which will allow me to carry out basic repairs and maintenance on US registered aircraft. Which is a requirement for MAF US whom MAF Canada is planning to loan us out to.
Tuesday we also had the privilege of watching John JR (Julie’s younger bother) play Basket Ball. John plays for a Christian College team from Grand Rapids. The following couple pictures were from the game.

Eager Fan did a lot of loud cheering 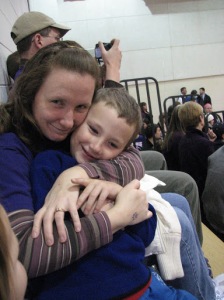 Ahhh
Saturday the 15th we celebrated Christmas with Julie’s family. The kids had a great time of opening gifts! The best part is most of the gifts were small enough that the kids might be able to take most of them with us when we move. And then as you can see in the photos the Granger tradition of jumping in the pile of paper after words was a big hit as usual. 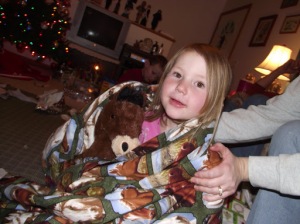